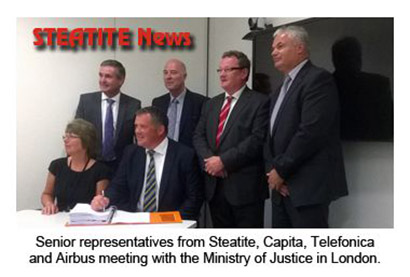 Further to the announcement on 15 July 2014 by parent company SolidState plc (AIM: SSP), Steatite has now
finalised contract terms with the Ministry of Justice (MoJ) to supply monitoring hardware for GPS offender tagging.

The contract for the supply of monitoring hardware is expected to havea value of approximately £34 million  over the three year minimum contract period.

It is anticipated that Steatite will be supplying initial products to the MoJ by the calendar year end. Quantities to be delivered are then expected to progressively increase over the contract term.

“This is a landmark contract for the Group and our largest to date. It marks the culmination of three years development work by Steatite and suitably illustrates the scale and complexity of the contracts that we are increasingly tendering for.  I would like to congratulate John Lavery and his team for securing this high profile contract.”

We use cookies to ensure that we give you the best experience on our website. If you continue to use this site we will assume that you are happy with it.OkRead more